The 51st edition of the prestigious Maybank Malaysian Open will return for the third year running to the resplendent Kuala Lumpur Golf & Country Club from 12 - 15 April 2012.


Maybank, who are entering their seventh consecutive year as the title sponsor of the National Open, today confirmed that world number four and 2010 US PGA Championship winner Martin Kaymer of Germany and 2011 Masters Tournament champion and ninth-ranked Charl Schwartzel of South Africa will headline the field in the US$2.5 million tournament, jointly sanctioned by the Asian and European Tours. 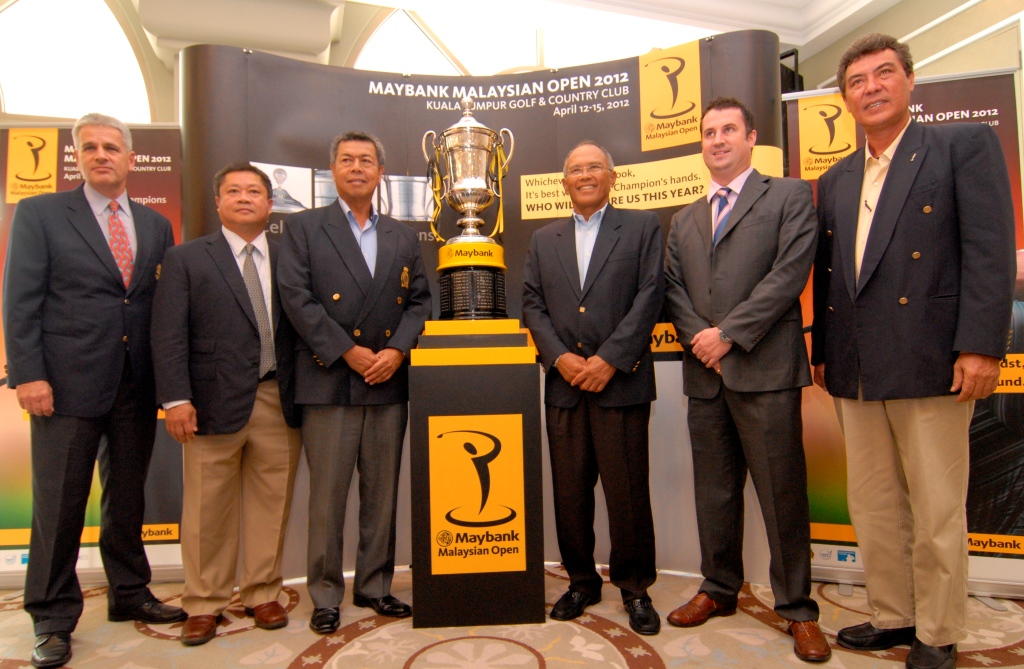 On the return of Kaymer and Schwartzel to Malaysia, Tan Sri Dato’ Megat Zaharuddin added, “We are thrilled to welcome back Martin Kaymer to the Maybank Malaysian Open. He was definitely a gallery favourite last year and is a proven winner, and I believe that the spectators will be delighted once again to witness the German's stellar long game and nifty touches around the greens."


The custodians of the Maybank Malaysian Open, the Malaysian Golf Association (MGA)  acknowledged that the Open has played a pivotal role in expanding the reach of the game in the country.


"The growth of the Malaysian Open is also indicative of how far golf has developed in Malaysia and how this tournament has played a part in the improvement of our local players over the years. The Open’s ability to consistently attract world-class golfers to our shores has not only motivated our local professionals to raise the level of their game but also inspire a new breed of young champions, who are given the opportunity to observe and learn the finer aspects of competing on the international stage,” said MGA President Admiral (R) Tan Sri Dato' Setia Mohd Anwar Mohd Nor.


The Kuala Lumpur Golf & Country Club, located at the heart of Kuala Lumpur, will host the National Open for the fourth time in its history – it also hosted the event in 2006 - and the challenging West Course with its multiple dogleg fairways and demanding multi-tiered greens will be primed once again for the onslaught of the professionals from the Asian and European Tours.


"This marks the third straight-year that KLGCC has been chosen as the venue for our prestigious National Open. We view it as a great honour and are looking forward to shoulder the responsibility as the venue for the Open's 51st edition. Together with Maybank, MGA, GlobalOne and all other stakeholders, we will endeavor to once again deliver a truly world class golf tournament to remember,” said Robert Bird, the General Manager of Kuala Lumpur Golf & Country Club.


The first tournament in Asia to be co-sanctioned by the European and Asian Tours in 1999, the Maybank Malaysian Open 2012 will once again feature top players from the rankings of both these professional circuits to make up the 156-player line-up. Prize money earned at the Maybank Malaysian Open 2012 will go towards the Asian Tour Order of Merit and will also count towards The 2012 Race to Dubai, where the top 60 ranked European Tour players at the culmination of the Hong Kong Open in November will qualify for the season ending DP World Tour Championship, Dubai from November 22-25.


Asian Tour Executive Chairman Kyi Hla Han said: “The Maybank Malaysian Open has for long been one of the most highly anticipated championships on our Schedule and our talented members are looking forward to the 2012 edition. Asian Tour players have traditionally played well in Malaysia with the likes of Thongchai Jaidee, Charlie Wi, Arjun Atwal and Noh Seung-yul winning the championship in recent times and we look forward to another great week of golf. It is indeed fantastic that Maybank continues to support the Malaysian Open in a very big way which is why the event is now regarded as truly world class.”


Last year saw the tournament commemorate its 50th anniversary and while we celebrated the past we also rejoiced at the future of the game through the wonderful performance of eventual winner Matteo Manassero. I am sure this year’s tournament will produce an equally worthy champion.” The premier event has seen the likes of Peter Thomson, Vijay Singh, Padraig Harrington, Retief Goosen, Michael Campbell, Lee Westwood and Sir Nick Faldo in the lineup over the decades and in recent times, produced young and exciting winners in the form of Korean sensation Noh Seung-yul (2010) and Matteo Manassero of Italy last year.


"The Maybank Malaysia Open has also been the breeding ground for a host of young guns aiming to lay their mark in the paid ranks against their much fancied and experienced professionals. If the last two editions are to be taken as a yardstick, we are in for another enthralling battle of generations in the coming edition," said John Eu, Chief Executive Officer of event organizer GlobalOne.


Maybank also reiterated its commitment to the development of Malaysian golf champions through a large allocation of invites to top local professionals and amateurs to participate in the tournament. "It is with this in mind that we have maintained the number of Malaysians in the field for the tournament at 22 golfers and we hope that our local players will deliver truly inspiring performances that we all can be proud of.


"We are also pleased to announce that based on their performances last year and dedication and perseverance to their trade, Danny Chia and Shaaban Hussin will continue their roles as Maybank brand ambassadors. Galvanised by the financial sponsorship extended by Maybank to them earlier last year, the experienced Malaysian duo have enjoyed commendable success both on the domestic and regional Tours in 2011,” said Tan Sri Dato’ Megat.


The Maybank Malaysian Open will once again attract a star-studded cast, with the Malaysian professionals pitting their skills against the very best players from Asia and Continental Europe to lift the prestigious Seagram Trophy.


With a US$ 2.5 million prize purse up on offer, spectators can expect an exciting tournament this April.