The largest gathering of junior golfers from all over of Malaysia successfully completed their intensive training stint at the Maybank Junior Golf- National Camp 2011 today.

The specially devised programme was aimed at imparting an advanced level of golfing technique, mental preparation and course management skills to the youngsters aged between 12 and 16 years of age. Importance was also placed on equipping these juniors with adequate knowledge on golf rules and etiquette to take their game to the next level.

The training sessions at the camp included lessons on short game elements such as irons shots, pitching, chipping as well as improving the juniors' distance of the tees. Fitness and the rules of the game were also incorporated into the programme and all players were given the opportunity to put their new learned skills into practice on the golf course.

Tan Sri Dato’ Megat Zaharuddin Megat Mohd Nor, Chairman of Maybank, was pleased with their involvement at the grassroots level and pledged to continue their support towards the development of golf in the country. "The Maybank Junior Golf -National Camp has always been the highlight in the national junior golf schedule and we're pleased to be working with MGA once again to reach out to our young Malaysian talents. This is just the first step along a series of initiatives that Maybank has planned to further expand the golf game among the youth of Malaysia, which we will be announcing in due course," he said.

Except for M. Ramayah the rest of the professionals were all successful products of the Malaysian Golf Association's junior development programme in the past and took time off their busy playing schedules to impart their knowledge and experience with the nation's future batch of champions.

Admiral (R) Tan Sri Dato Setia' Mohd Anwar Mohd Nor, president of the Malaysian Golf Association took to heart that Maybank has continued to support the association's effort in promoting the game of golf and its ideals to the younger generation. "I would like to thank MAYBANK for sharing MGA's vision to develop a more structured golf development programme that will reach right down to the grassroots level so that we not only discover hidden but also develop new talents’. I believe in so doing, we aspire to make Malaysia as one of the leading golfing nations not only in this region but also recognised internationally. As a sporting association, we need the support of corporate bodies and once again extend our full appreciation to MAYBANK for their strong CSR in promoting golf in Malaysia."

John Eu, Director of GlobalOne, the event organizer of the Maybank Malaysian Open and a close partner with Maybank and MGA in developing golfing opportunities in Malaysia was delighted at the outcome of this event. He said, "We are grateful to have Maybank working hand in hand with MGA towards cultivating the growth of golf in the nation from an early age. It augurs well for the future of Malaysian golf that these eager youths are given the opportunity to advance their knowledge in the game."

Nurdiyana Aqilah Bte Khalim was awarded the best girl while Mohd Shakiran Bin Johari received the honour for the boys. They will now enjoy the experience of teeing-up alongside the best professionals from both the European and Asian Tours at the upcoming Maybank Malaysian Open 2012. 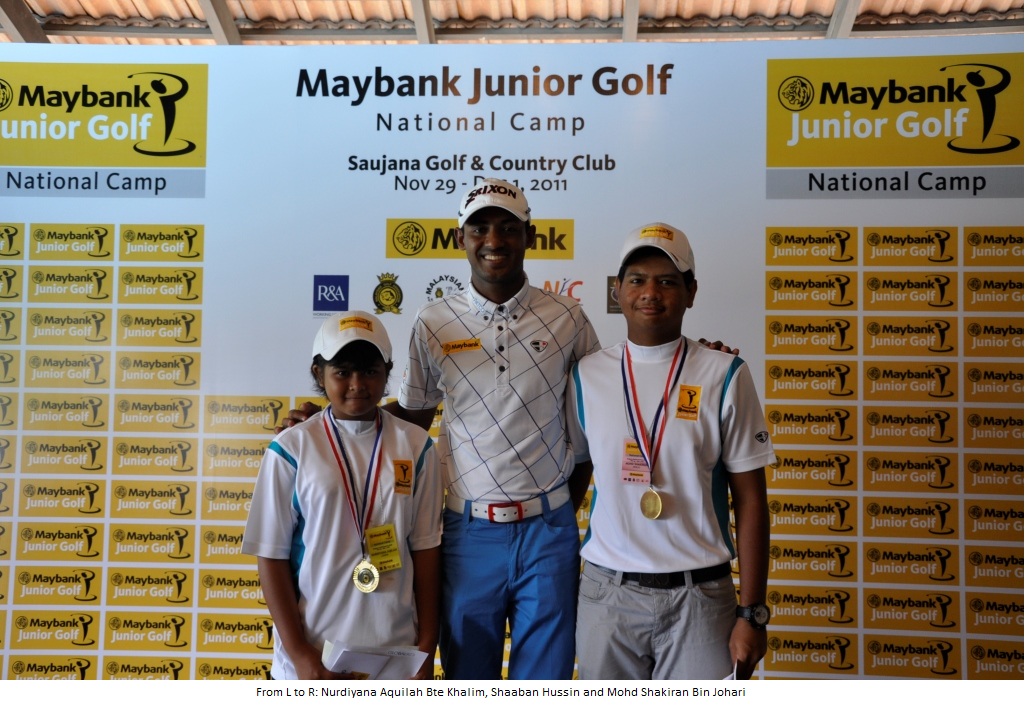