Rahardja Alimhamzah, BII’s Acting President Director, said “I am pleased that we continue to show sustainable growth across all business segments though there is still much to accomplish in our quest for greater growth and higher market share. Our growth record and ability to tailor products to customer needs as well as continued investments in the Bank’s infrastructure, and continuous improvement in all aspects of operations have placed us on the right track in capturing higher market share and achieving our aspiration to be the best financial provider in the markets we serve”.

“Our branch and electronic channel expansion, innovative loyalty and acquisition programs, new product launchings combined with proven excellent service quality will certainly support and contribute to the growth of the Bank’s customer deposits. The recently launched mobile banking and new internet banking platform that will be launched soon will enable the Bank to further attract new customers and expand our customer base.”

The Bank’s growth across the business segments was accompanied by improved asset quality. The Bank’s gross non performing loans (gross NPL) level reduced to 2.45% as of June 2011 from 2.88% in June 2010 and net NPL improved to 1.22% from 1.87%. The improvement in asset quality was achieved through the Bank’s continuous effort in strengthening its risk management and credit processing while implementing quicker loan restructuring programs and closer monitoring of existing borrowers.

Loan loss provision expense in June 2011 increased 19% from Rp473 billion in June 2010 to Rp561 billion in June 2011 due to the higher provision expense for WOM’s portfolio primarily related to its venture into second hand motorcycle financing. Given this situation, WOM has now curtailed the financing for used motorcycle while redefining used motorcycle business model and distribution channel to improve its asset quality. In addition, WOM has also undergone strengthening its core management team to provide better oversight in this area.

Total overhead costs increased 31% from Rp1,646 billion to Rp2,156 billion reflecting the Bank’s aggressive network expansion and investments in human capital as well as IT infrastructure throughout the first semester 2011. As of June 2011, the Bank has 344 offices (including Syariah and overseas branches) and more than 1,000 ATMS.

Maybank Chairman and President Commissioner of BII, Tan Sri Dato’ Megat Zaharuddin bin Megat Mohd Nor added, “I am pleased that BII’s efforts to expand our coverage and deepen our customer focus has led to strong growth. Additionally, we have seen encouraging synergies with the Maybank Group in various business areas which now have started to bear fruits. The Bank’s sincere attention to the communities it serves, by providing customers with products and services which are of value and fair, reflects the Group’s mission in Humanizing financial services Across Asia”. 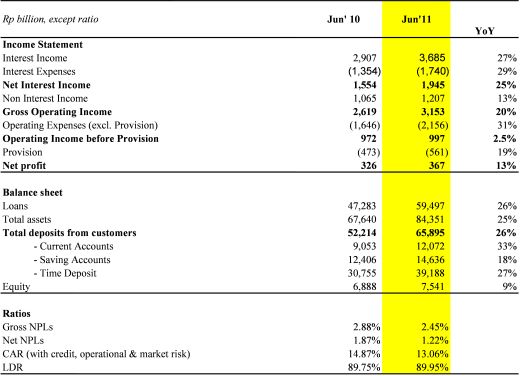 BII is one of the largest banks in Indonesia with an international network that comprises 344 branches including five Syariah branches and 3 overseas branches, 1,017 ATMs and 15 CDMs (Cash Deposit Machines) BII across Indonesia, and also connected with more than 20,000 ATMs under ATM PRIMA, ATM BERSAMA, ALTO, CIRRUS, and Malaysia’s MEPS network, and to more than 2,800 Maybank ATMs in Malaysia and Singapore as well as a banking presence in Mauritius, Mumbai and the Cayman Islands. As of 30 Juni 2011 total customer deposit base of Rp65.9 trillion and Rp84.4 trillion in assets, BII provides full range of financial services through its branch and ATM network, phone banking and internet banking channels. BII is listed on the Indonesia Stock Exchange (BNII) and is active in SME/Commercial, Consumer and Corporate banking.