Maybank signs on as main sponsor of BAM

Maybank has signed on a six-year collaboration as Main Sponsor with Badminton Association of Malaysia (BAM) that will see programmes designed to nurture a new generation of badminton players to build champions as well as advance Malaysia’s supremacy in badminton with current and upcoming young players.

“We are pleased to be collaborating with BAM as both BAM and Maybank share a common goal to promote excellence in badminton especially among the young to enable them to achieve success and put Malaysia in the limelight in badminton,” said Abdul Wahid in his speech. 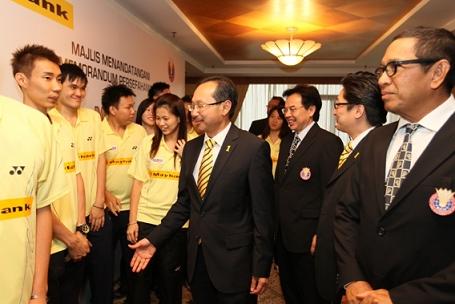 Maybank’s collaboration will enable BAM to carry out various joint programmes such as clinics and tournaments to provide exposure particularly to the new generation of players. National badminton players will also be involved to promote the game as well as inspire the young to excel. There will also be performance bonuses for those who emerge champions in the various tournaments.

“We are attracted to badminton as it has mass popularity as well as a sport where Asians excel. It is a strong sports brand that puts Malaysia on the world arena being recognised as amongst the top in this game. This Asian excellence in badminton fits well with Maybank as a recognised brand across Asia where we operate and serve more than 18 million customers in the region. By leveraging on our network in Asia we are able to project a strong visibility of our brand’s association with badminton and Malaysia’s champion status in this game to a combined population of about 3 billion people in the region,” said Abdul Wahid.

Abdul Wahid also said that Maybank will use its experience as title sponsor of the Maybank Malaysia Open, one of the premier international golf tournaments in the region, to boost interest and standard of badminton in Malaysia. “Our support of the Maybank Malaysian Open for six consecutive years has elevated the Open to gain even greater international prominence capturing more than 400 million viewers worldwide as well as interest in golf among the young. We will use our experience in golf to also promote badminton to the young and enhance its popularity and stature as well as Malaysia and Asia’s dominance in the sport,” he said.

Abdul Wahid added that badminton’s popularity provides a powerful catalyst for nation building. “The legacy of success by past and present badminton players has elevated badminton into one of the most popular sports in Malaysia and the world. Badminton is one of the core eight sports activities being promoted in the government’s overall commitment of achieving sporting excellence as part of nation-building. Our sponsorship is aligned to the government’s initiative as well as support one of the Group’s core corporate responsibility programmes, which are the development of sports,” he said.

“To kickstart our collaboration with BAM, Maybank will soon undertake a ‘Going for Gold’ campaign aimed at setting our sights to win Gold in badminton in the London Olympics in 2012. This also sets the stage to build champions beyond to enable Malaysia to achieve success particularly in the various international badminton circuits such as the Thomas Cup, All England and World Champion. Through this partnership, badminton fans can be assured that they will be able to enjoy the best from the Malaysian badminton team,” said Abdul Wahid.

Dato' Sri Mohd Nadzmi Mohd Salleh said, “BAM is very pleased to welcome an esteem financial institution, Maybank on board and thus will enable to elevate the game to a higher level. With this, too, we are able to implement more development programmes and moving one step nearer in realising our objectives.”

Among the benefits as Main Sponsor are promotion of badminton clinics for the young and exclusivity to include Maybank as principal partners in international badminton tournaments such as Malaysia Open Superseries, Malaysia Open Grand Prix Gold, and Malaysia International Challenge.

Badminton is the second major sports Maybank is principal sponsor as it is currently the Title Sponsor of the Maybank Malaysian Open, for the next five years. Maybank has contributed national badminton players who have gone on to become legends in badminton namely Tan Aik Huang, Rosalind Singha Ng, Wong Choong Hann, Chong Tan Fook, and Lee Wan Wah and Norhasikin Md Amin.