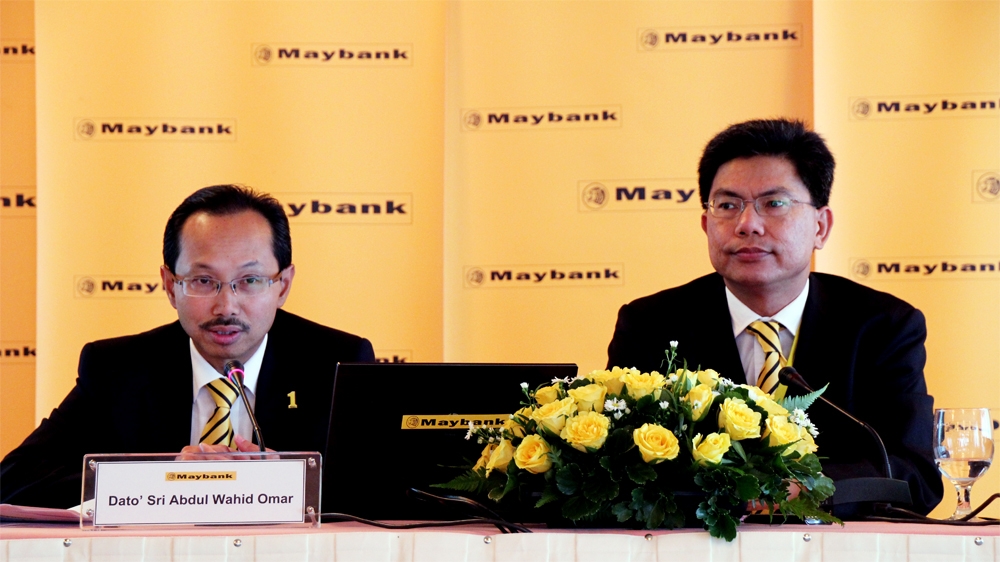 The improved performance was driven by higher revenues across almost all business segments of the Group as well as significantly lower allowance for losses on loans. The Group’s Indonesian operations continued to lead in loans growth with a robust 27.3% annualised increase followed by Maybank Islamic at 23.5%, Singapore Operations 17.8%, other international operations 20.9% and Community Financial Services 10.1%.


The results also bear testimony to the transformation efforts arising from the reorganisation into the new “House of Maybank” which took effect from July 2010. Amongst others, the Group registered higher growth in SME loans, which are now available throughout the entire branch network instead of only through business centres, undertook the expansion of its Islamic banking business in Indonesia through the establishment of Maybank Syariah Indonesia as well as entered into an agreement to acquire Kim Eng Holdings in a bid to expand its regional investment banking capabilities.


In summary, the better performance for the six months can be attributed to:

Compared to the first quarter of FY11 ended 30 September 2010,  the second quarter ended 31 December 2010 saw profit before tax rising 11.2% to RM1.56 billion from RM1.40 billion previously. PATAMI for the second quarter was 9.4% higher than the RM1.03 billion in the preceding quarter.


When compared to the second quarter ended 31 December 2009, the profit before tax and PATAMI for this second quarter were 11.6% and 13.3% higher respectively.

The Board has declared an interim dividend under the Dividend Reinvestment Plan (DRP) of 28 sen per share less 25% income tax. Out of the amount, 4 sen per share (3 sen net) will be paid in cash while the balance of 24 sen (18 sen net) per share will be in the Electable Portion whereby a shareholder may either elect whether to receive it entirely in cash or reinvest the cash in Maybank shares.


The interim dividend which represents a payout ratio of 71.4%, exceeds the general dividend payout guideline of 40-60%, and will be distributed no later than three months from the date of declaration.

Community Financial Services remains a key contributor to Maybank Group’s revenue and profit. Revenue for the half year rose 6.1% to RM2.98 billion from RM2.81 billion previously. Its strong annualised loans growth of 10.1% was attributed to a 15.6% rise in financing of securities (a major part of which is for unit trust investments), 13.5% in automobile financing, 12% in credit card receivables and 9.4% in mortgages.


Maybank continues to strengthen its leadership in the Cards business showing steady growth in market share of card billings (22.% vs 21.6% in 2009), card base (16.3% vs 15.5%) and card merchant sales (29.8% vs 29.1%). Cards billings outpaced industry growth, registering an increase of 17.5% compared with 13.6% for the industry while decline in card base was slower than industry. The Group also strengthened its market share in automobile financing which rose to 18% in December 2010 from 17.1% in June 2010.


Loans to the SME and Business Banking segment registered a turnaround with an annualised growth  of 3.2%. This reflects the early successes of the recent realignment in the Group’s organisation structure where all branches now act as point of sales and service for SME and business customers. Market share for SME loans have also shown a pick up from 15.0% in June 2010 to 15.6% in December 2010.

Global Wholesale Banking ‘s domestic business registered a 5.9% rise in total revenue to RM1.55 billion. Loans grew 4.8% on an annualised basis to reach RM45.9 billion. Term loans and overdraft recorded a growth of 2.1% while trade finance grew 6.4%, both registering a turnaround. Market share for trade finance in particular has improved strongly to 23.4% in November 2010 from 22.2% six months earlier.

This segment saw an 11.8% rise in revenue to RM594.3 million for the half year   with loans rebounding in this half year. The Group is optimistic that this resurgence in corporate loans will continue with increased investments as well as the various initiatives under the government’s Economic Transformation Programme take off.

Global Markets registered a 2.3% rise in revenue, which touched RM812.0 million, supported mainly by improvement in trading activities. Overseas operations’ contribution to revenue was 25.3% mainly from Singapore with 11.3% and BII with 7.6%. Its securities portfolio expanded by 28.5% on an annualised basis to reach RM61.9 billion led by a 49.8% rise in government securities and 18.5% increase in PDS/Corporate Bonds.


Maybank Investment Bank has moved to top spot in the league tables in the Debt Markets (Malaysia Domestic Bonds) and Debt Market (Ringgit Islamic Bonds) categories from fourth and second ranking previously. It has maintained second spot in Equity & Rights Offerings and third in M&A and Equity Brokerage.

Combined gross premium grew 9.7% supported mainly by a 22.9% growth in General Insurance, of which Motor Premium registered a 17.1% rise and Fire 2.2%. Total Life/Family premium rose a moderate 2.5% on account of lower single premium sales. Its overall loss ratio of 51.3%  for general insurance is also well below the industry rate of 60.8%.


To maintain its leading position, Etiqa is accelerating growth of its agency force as well as Bancassurance business, enhancing its third party Asset Under Management services while growing the Bancassurans business via Maybank as well as emphasising on building a profitable portfolio for Group Health Insurance.

Maybank continued to surge ahead in Islamic Banking with a strong performance for the half year, registering revenue growth of 19.8% to RM1.08 billion. Profit before tax surged 79.5% to RM429.9 million.


Maybank Islamic saw financing grow at a robust 23.5% on an annualised basis comprising a 24% rise in consumer financing and 22% in business financing.


Ranked 17th in the world among Islamic banks and the largest in the Asia Pacific,  Maybank Islamic saw an 8.2% rise in total assets which helped it maintain its leading market share of 17% of total Islamic assets in Malaysia. Islamic assets also currently comprise about 26.1% of total Group domestic financing.


Customer deposits grew 3.2% on an annualised basis while asset quality continues to remain excellent with the net non-performing loan ratio at 0.25% in September 2010.

BII recorded a 16% rise in gross operating income to Rp 2.959 trillion for the half year compared with Rp 2.551 trillion previously. Net interest income surged 21.2% despite a further tightening in net interest margin to 5.89% for the full year 2010 from 6.10% a year earlier. Non-interest income rose a more moderate 7.4%. Profit before tax for the half year was Rp 257 billion from Rp 365 billion previously.


Gross loans on a year-on-year basis rose 35% to reach Rp 53.6 trillion with the highest contribution to growth coming from a 45% increase in consumer loans, followed by SME & Commercial loans (+31%) and corporate loans (+29%).  Growth in consumer loans was led by automobile financing which contributed  55.9% of the total consumer loan portfolio, mortgage loans 28.9% and credit cards 8.8%.


Total deposits from customers rose 26.5% to Rp59.9 trillion while the capital adequacy ratio for the Bank remained a healthy 12.5%. The net impaired loan ratio remains low at 1.74% reflecting the solid asset quality at BII.


The Bank’s subsidiary WOM Finance more than doubled its pre-tax profit for the full year 2010 to Rp195 billion from Rp 93 billion in 2009, on the back of a 10% rise in revenue. Monthly sales volume has steadied at around 44,000 units.

MCB Bank of Pakistan recorded commendable growth for the full year ended December 2010 recording a 15.9% increase in revenue to Rupee 39.6 billion compared to the previous year. Profit before tax rose 13.5% to Rupee 26.5 billion. Loans and deposits grew 0.5% and 17.3% respectively while net interest margin declined marginally to 7.8% from 8.4% a year earlier.

"Our sustained double digit profit growth bodes well for our transformation progress towards our regional leadership aspirations. With the impending integration of our Kim Eng acquisition, we will continue to focus on our growth priorities whilst honing our differentiation capabilities in humanising financial services, which over time will be clearer to our stakeholders".


“Our performance in the first six months is very encouraging and reflective of the momentum we have built through our change initiatives and the new ‘House of Maybank’ structure that we introduced in the beginning of the financial year. The steady results point to stronger performance in the future. We are well poised to leverage on the continued growth in the region.


In addition, our expanding regional footprint will not only support the growth of our international banking business but also puts us on the right track to emerge amongst regional financial leaders in ASEAN by 2015.