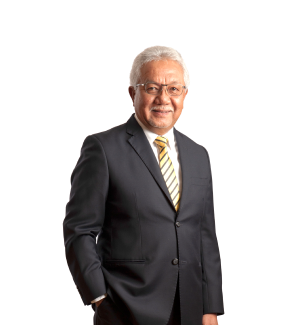 Tan Sri Dato' Sri Zamzamzairani Mohd Isa was appointed as a Non-Independent Non-Executive Director and Chairman of Maybank on 2 November 2020. He also chairs the Board Sustainability Committee.

He holds a Bachelor of Science in Communications Engineering from Plymouth Polytechnic, United Kingdom and has completed the Corporate Finance, Strategies for Creating Shareholder Value programme at Kellogg School of Management, Northwestern University, United States of America. He has also attended the Strategic Leadership Programme at the University of Oxford’s Saïd Business School and the IMD CEO Roundtable at Lausanne, Switzerland in 2013.

Tan Sri Dato' Sri Zamzamzairani has vast experience spanning more than 30 years in the telecommunications industry, beginning in Telekom Malaysia Berhad (TM) where he served for 13 years before assuming key positions in several multinationals such as Global One Communications and Lucent Technologies (Malaysia) Sdn Bhd, where he was Chief Executive Officer (CEO). He returned to TM in 2005 as Senior Vice President, Group Strategy and Technology and was later promoted to CEO, Malaysia Business, before being appointed as the Group CEO and Managing Director in April 2008 until his retirement on 30 April 2017.

Under his leadership, TM launched and successfully rolled out the high speed broadband service in 2010, in a historic collaboration with the Government of Malaysia. He was awarded the Business Person of the Year 2015 at the Asian Academy of Management International Conference, organised by Universiti Sains Malaysia in October 2015. He was also named CEO of the Year 2015 at the Minority Shareholder Watchdog Group’s Annual Corporate Governance Awards ceremony held in December 2015. He was conferred a special individual award for ‘Outstanding Contribution to the Industry’ at the 2017 Frost & Sullivan Malaysia Excellence Awards and named the prestigious Telecom CEO of the Year at the 20th Telecom Asia Awards 2017.