Maybank Cambodia Plc. opened a new branch in Ta Khmao, Kandal Province, reinforcing the Bank’s commitment to expand its footprint across the nation and provide the Cambodian community with convenient access to banking services. The new branch will deliver a full range of over-the-counter transactions including deposits and placements, trade finance, loans, remittances, mortgages and global ATM. 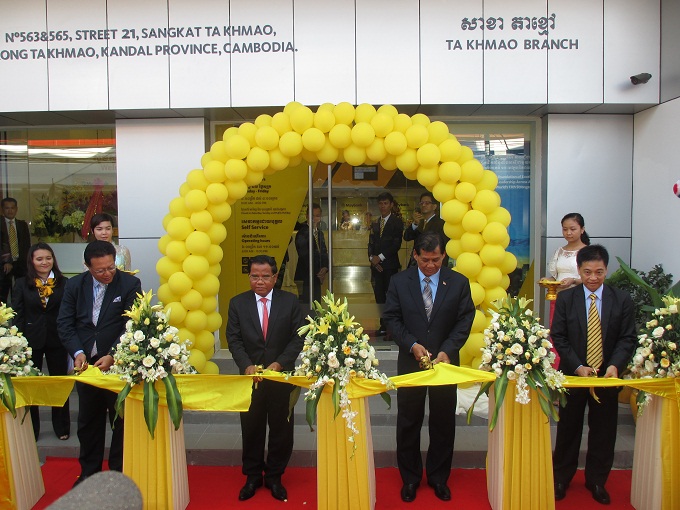 Also present at the event were H.E. Phay Bun Chhoeun, Governor of Kandal Province; H.E. Raszlan Abdul Rashid, Ambassador of Malaysia to the Kingdom of Cambodia as well as Lee Tien Poh, CEO and Director of Maybank (Cambodia) Plc.


Speaking at the event, Lee Tien Poh said keen investors’ interest in provincial areas like Ta Khmao has resulted in increasing consumer and commercial activities, signifying a timely opportunity for Maybank to launch its financial and banking capabilities there.


“We are expanding to the area of Ta Khmao to allow for greater banking accessibility to the community in the area. The opening of this new branch reflects our mission of humanising financial services and our long term commitment to support the economic development of the country, particularly its City Development Strategy for the capital of Phnom Penh and its surrounding areas identified as secondary centers. Our presence in Ta Khmao will provide opportunities to people in Ta Khmao and its surrounding to enjoy easy access as well as convenient and safe banking services”.


Lee added that the opening of four branches last year in 2013 has further spurred the deposits growth of Maybank in Cambodia, which had shown a healthy growth of 40% year on year. This reflects the confidence of depositors in Maybank as a custodian of their savings. With the trust placed on the Bank, he added that this will enable Maybank to play its role to lend to productive sectors of the Cambodian economy; thereby promoting growth and employment.


Maybank has planned to open five additional branches in 2014, beginning with the Ta Khmao Branch.