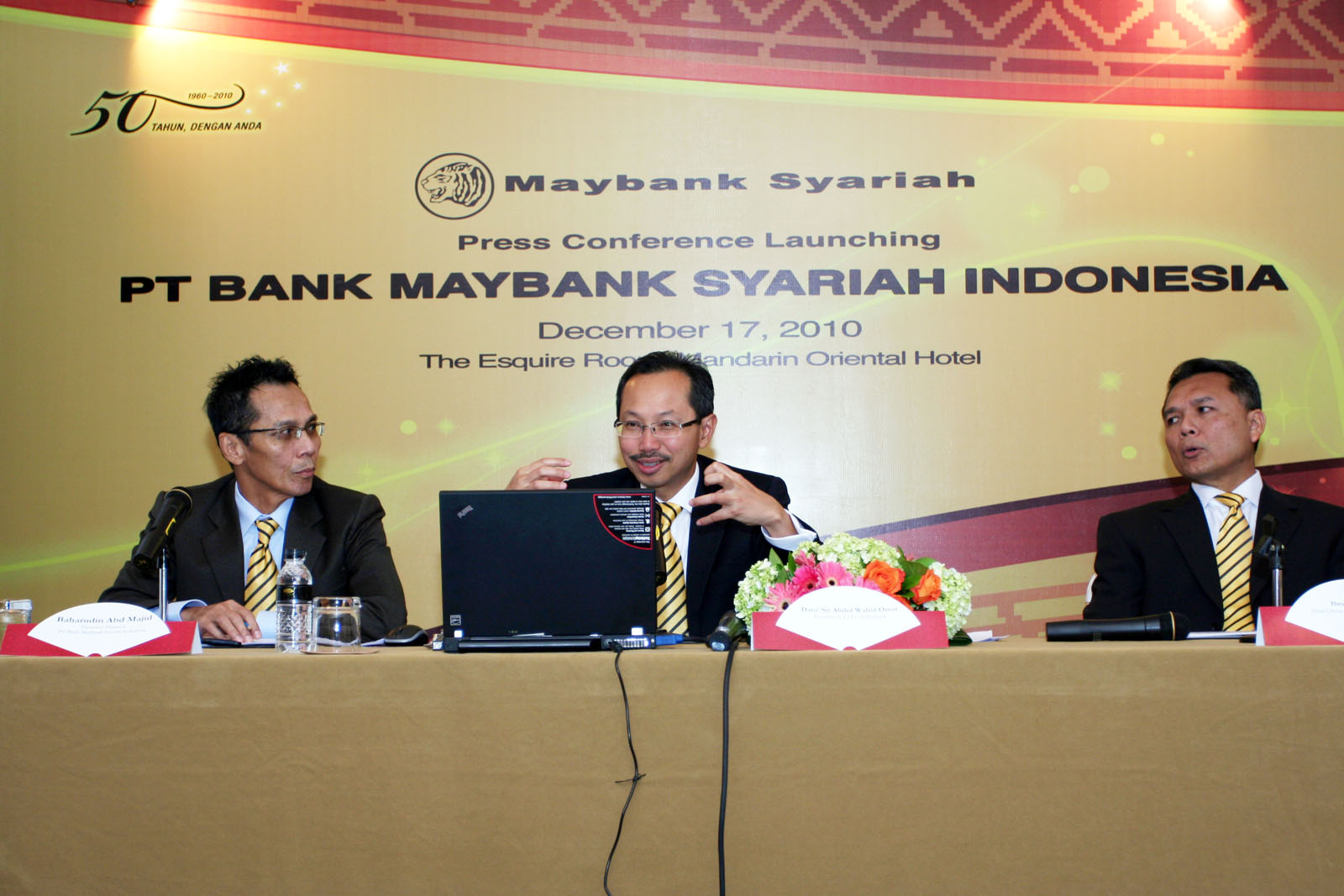 BMI which has been operating in Indonesia since 1994, received approval from the central bank of Indonesia on 23 September 2010 to convert its operations into an Islamic bank. It has in the past, been operating mainly in wholesale banking offering corporate banking, trade finance and treasury services to a wide range of corporate client. In addition the bank offered niche retail banking services through its office in Jakarta.

The launch of the new bank was officiated by Maybank Chairman Tan Sri Megat Zaharuddin Megat Mohd Nor and President & CEO Dato’ Sri Abdul Wahid Omar at a reception in Jakarta. Also present at the event were members of the Board of Commissioners of MSI, senior government officials as well as a wide range of clients.

Speaking to the media in conjunction with the launch, Dato’ Sri Abdul Wahid Omar said that the move to convert BMI into a syariah bank was in line with Maybank Group’s strategic objectives to expand its Islamic banking operations regionally.

Maybank already has a successful Islamic banking subsidiary in Malaysia through Maybank Islamic Berhad (MIB), which is not only the largest Islamic bank by assets in the country but also in the Asia Pacific region. It is also ranked 17th in the world.

“Our aspiration is to become the number one Islamic bank in ASEAN by 2015 in terms of reach and this cannot be achieved without a presence in Indonesia, the largest market in ASEAN,” he said. “Given its large Muslim population, Indonesia is a critical market that we must be present in if we are to achieve our aspiration in Islamic banking leadership.”

Dato’ Sri Abdul Wahid added that given the relatively untapped Islamic banking sector in Indonesia, Maybank believes that there will be strong demand for such services in the republic not only in the consumer market but also in the corporate and investment banking sector.

“The Syariah Banking industry in Indonesia constitutes merely three percent of the total banking industry, with about 11 institutions holding full fledged Syariah banking licenses. We believe we can expedite the growth of the industry by bringing to market our range of Islamic based products and services,” he said.

He said that the conversion of BMI into a syariah bank was also an obvious choice as the Group already had a full fledged commercial bank through Bank Internasional Indonesia (BII) which had a network of over 300 branches throughout Indonesia.

“Our intention is for MSI to tap on the Group’s expertise in Islamic banking to manufacture global best Islamic banking products and services which will then be channelled through BII’s extensive network in Indonesia, particularly in the mass consumer banking market,” he explained. MSI would, however, be an additional channel to serve the premier retail as well as corporate, commercial and investment banking clients in Indonesia who require Islamic banking financial services and solutions.

Through the premier retail focus, MSI will introduce products and services for High Net-Worth Individual such as Islamic credit cards, bancassurance, and investment product as well as open up more Islamic branches.

Meanwhile, the Syariah corporate segment will focus on financing to the growth sectors such as natural resources sectors, infrastructure, automotive and housing, and at the same time serve as referrals for initial public offering, sukuk underwriting and advisory services.

“As Malaysia’s regional financial services leader, we have the capability to draw on our Group resources and expertise to bring financial solutions that best meet our client needs anywhere, whether in the conventional or Islamic banking segments,” he said. “Indonesia represents a key market for us and it is important for us to be able to offer our clients here access to a complete array of banking services that can meet their needs in the most competitive terms possible – this is line with our mission to humanise financial services across Asia.”

Maybank first commenced offering Islamic banking services in Malaysia in 1993 through an Islamic banking window at all its branches in the country. On 1 January 2008, the Group launched MIB, its full fledged Islamic banking subsidiary in Malaysia. MIB branches are co-located at all Maybank branches in Malaysia as well as through its own network of 12 Islamic banking branches. Maybank commands 17 percent market share in the Islamic Banking in Malaysia with Syariah compliant assets of over RM44 billion (USD14 billion) or 17 per cent of the total Islamic assets in Malaysia as at end June 2010. In the first quarter ended September 2010 of Maybank’s current financial year, MIB’s profit before tax and zakat increased 167% to RM195.3 million compared with RM73.1 million previously.

Apart from Malaysia where it is a clear market leader, Maybank has also extended its offering of Islamic banking services to its global offices in Singapore, Bahrain London and Labuan International Financial Centre.