Imagine an entire shopping centre at your service, while you shop for free. Unless you've won a contest grand prize, golden nuggets like this hardly comes by as a daily affair. With a rich legacy of pioneering innovative services and driving excitement, free shopping is now possible with 1 Utama announcing one of the most exciting retail concepts of the year - RCubed Free Shopping ("Rewarding Redemptions for Retail").

Essentially a credit card reward points redemption programme operated by RCUBED Sdn Bhd, credit card holders can purchase merchandise, services and F&B for free at participating shops at 1 Utama by swiping their credit card and redeeming reward points to make payment instead of cash. The terminal will show total points available and the value in ringgit.

Partial or full redemption is accepted, providing shoppers the flexibility to top up the amount to pay off the total bill. Simply put, RCubed has created a redemption catalogue out of 1 Utama - proudly a 1st in the world retail service.

RCubed builds off on a similar concept adopted from 1 Utama's successful loyalty card ONECARD, where shoppers have the freedom to exchange accumulated shopping points with any purchase of their choice across 1 Utama retailers. ONECARD is also the world's first mall-wide loyalty programme.

The conversion rate for Maybank's credit card redemption shopping is 210 TreatsPoints = RM1.00. Shoppers can start redemption for any amount from 210 points onwards.

Response since RCubed's pilot run at 1 Utama on 7th August 2009 has been very encouraging. With a complete roll out from September 9th onwards with 150 outlets, more 1 Utama retailers are expected to be on board soon as RCubed participants. Redemption is also available at neighbouring 5-star One World Hotel for room stays and F&B.

Commented 1 Utama Director Dato' Teo Chiang Kok, "Our longstanding relationship with Maybank has provided us the opportunity to introduce high tech services. The RCubed Free Shopping programme is part of 1 Utama's commitment to provide shoppers with consistent new offerings that further enhance our shopping experience. We are proud to be the first mall in the world to implement such a unique method of shopping. The flexibility is astounding; shoppers can now spend their credit card points just like cash whenever and wherever they want which gives shoppers more purchasing power".

"RCubed reflects the best in brand strengths of 1 Utama and Maybank which are leaders in their respective areas of business. We are confident the RCubed programme at 1 Utama will be well received. Based on our soft launch, 1 million TreatsPoints were redeemed in the last four weeks, and with more merchants onboard by end September, we anticipate 10 million TreatsPoints will be redeemed in a month through this programme," said Maybank Executive Vice President, Head of Cards, Consumer Banking B. Ravintharan. 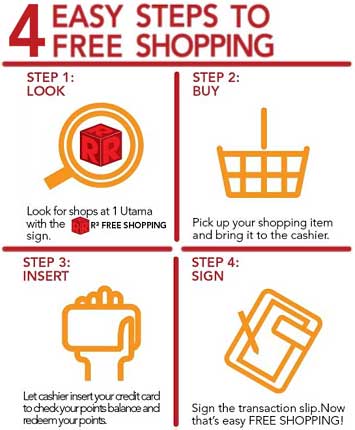 More and more cardholders are leaving their unused reward points at the table. With millions of points racked up through increased credit card spending, an equally substantial amount of points go unredeemed. Among the top reasons for low redemption take-up rates include static product catalogues, restricted redemption gift choice, the worry of having missing mail order redemptions etc.

With RCubed, the redemption process is uniquely simplified. Cardholders now enjoy benefits such as:

1 Utama and RCUBED has allocated has an initial start up cost of RM2 million, with RM1.5 million allocated yearly for technical development and marketing. Immediate future plans by 1 Utama include expanding the programme with other banks as points redemption partners so that more shoppers who generally carry more than one credit card can further benefit from RCubed shopping.

Said RCUBED Sdn Bhd's Director Mr Tan Chin, "RCubed Free Shopping advances the payment transaction ecosystem bringing true value to customers, malls, merchants and financial institutions. In addition to working with more partner banks so that customers will be able to pool their rewards points for an even better free shopping experience, we will also be working closely to expand their merchant acquiring business via RCubed. We are looking forward to expand RCubed's mall coverage throughout Malaysia and Singapore".