Maybank today announced that profit after tax and minority interest (PATAMI) for the six months ended 31 December 2011 surged 20% to a new record of RM2.58 billion. Group profit before tax also rose 20.1% to RM3.56 billion to close the six months financial period following a change in the Group’s financial year end from 30 June to 31 December.

The results were achieved from robust double-digit revenue growth across all business pillars on the back of sustained loans growth and fee based activities, as well as a marked decline in allowance for losses on loans. 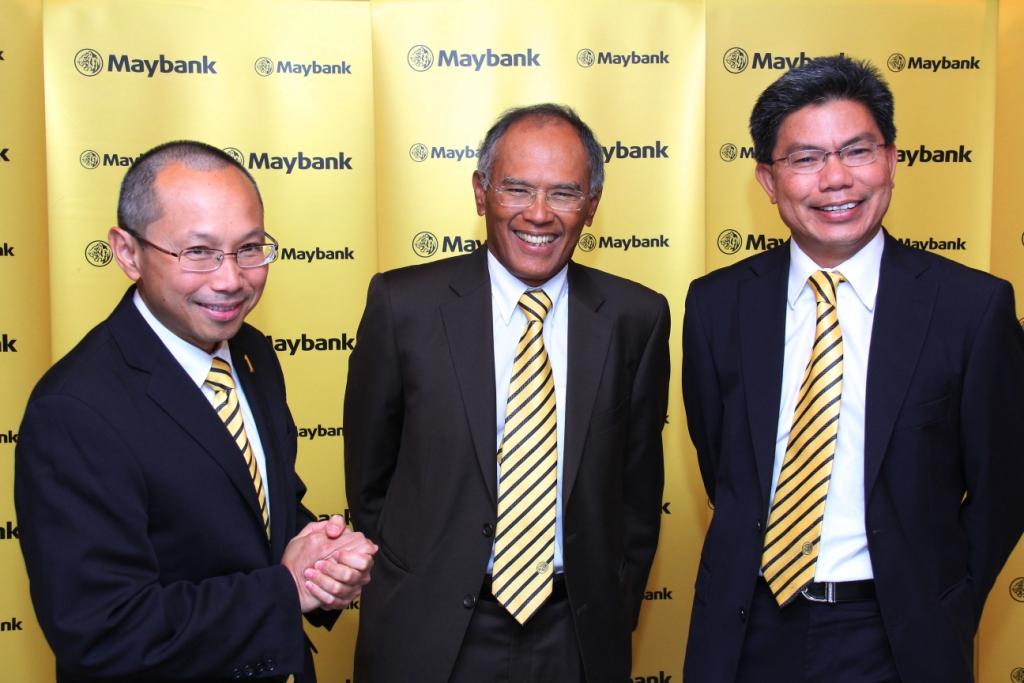 Gross loans continued to grow at a solid pace, rising 16.2% on an annualised basis. This was fuelled by a 28.7% rise in overseas loans and a 10% growth in domestic loans. Singapore and Indonesia operations showed especially strong growth with loans rising 23.7% and 31.2% respectively while other international operations saw an even higher 48.6% rise. Islamic financing meanwhile surged 21%.

Key drivers for the record performance for the six months included the following:

Significant achievements in the key business segments were as follows:

This represents a total payout ratio of 79.9%. The final dividend, if approved, will be paid no later than three months from the date of shareholders’ approval.

Comments by Maybank Chairman, Tan Sri Megat Zaharuddin Megat Mohd Nor
"Our outstanding results for the six-month new reporting period where we now end the fiscal year in December bear testimony to the increasing efficiency and adaptability to transformation by management and employees Group-wide. Thus, also with the increasing momentum to position our refreshed brand, not just in the minds of customers but also with our various communities, across all operational areas, I feel confident Maybank will continue to find growth opportunities amidst the economic turbulence we see around us."

Comments by Maybank President & CEO, Dato’ Sri Abdul Wahid Omar
“Our record performance is a result of our efforts in focusing on fundamentals and ensuring that we grow our business profitably and responsibly. We are especially encouraged that we are seeing continued across-the-board improvements not only in our financial performance but also in our customer service levels across all business sectors."

"We have successfully leveraged on the growth opportunities across our regional network and are continuing with initiatives to enhance productivity. Our intention is to further develop our capabilities in the coming years to create greater value for stakeholders in line with our 2015 regional leadership aspirations."

Community Financial Services, the major contributor to Group revenue and profit, registered a 13.4% increase in revenue to RM3.39 billion. Mortgages (+18.1%) led the pace for consumer loans growth, followed by credit card receivables (+17.6%), financing of securities (+16.3%) (a major part of which was for unit trust investments) and automobile financing (+12.8%). Market share for mortgages picked up to 13.2% from 12.9% in December 2010 while its asset quality continued to improve to 2.2% from 4.5% a year earlier. Automobile financing also saw improvement in its market share, moving up to 19.4% from 18.4% a year earlier

The Business and SME banking segment registered a 9.1% annualised rise in loans. Market share in the SME segment specifically, improved sharply to 19.2% from 15.5% a year earlier. Deposits from Business and SME Banking customers also grew at a robust pace of 46.3%.

Global Wholesale Banking
Global Wholesale Banking registered a 38.4% rise in revenue to RM2.15 billion, supported by a 43% rise in non-interest income and 33.6% rise in net financing income. Total loans grew 1.2% to RM57.7 billion as at December 2011, led by 8.8% rise in short term revolving credit & overdraft as well as a 6.1% rise in term loans. The Group enjoys a strong market share in trade finance which strengthened further to 26.9% from 23.3% a year earlier.

Corporate Banking’s results for the year was boosted by a 39.3% rise in net financing income to reach RM575 million while registering stable asset quality with a 3.7% net impaired loans ratio. This segment is expected to drive loans growth with the roll-out of various projects under the Government’s Economic Transformation Programme.

Global Markets recorded a marginal 2.7% decline in revenue to RM789.8 million, while profit before tax declined to RM602.1 million from RM658.9 million previously owing to lower net interest income and higher unrealised loss on revaluation of securities. The Group’s securities portfolio, however, grew 23% to reach RM68.1 billion supported by a 24.6% increase in government securities and a 17.3% rise in PDS/Corporate Bonds.

For Malaysia total income increased 35% in the six months mainly on account of strong deal flows which saw the Bank participate in a number of major deals such as the Bumi Armada, Pavilion REIT and Eversendai initial public offerings as well as YTL Power, KL Kepong, Midciti Resources and DRB Hicom debt programmes.

In the key markets, Maybank Kim Eng is ranked top in Philippines and Thailand and while it ranks 5th and 6th respectively in Indonesia and Vietnam. In Malaysia, Maybank IB is ranked 4th. Maybank IB remains among the top 2 in the Bloomberg Global Sukuk League Table, Equity & Rights Offerings and M&A categories.

The Group’s insurance business saw a doubling in revenue to RM595 million for the six months from RM295 million previously. Total assets continued its steady climb to reach RM23.8 billion from RM21.9 billion in December 2010.

Maybank which is a leader in the Islamic banking business, recorded a 37.9% increase in total income of RM1.01 billion for the period, compared with RM731.1 million in December 2010. Fund based income surged 38.7% to RM865.5 million while fee based income rose 32.9% to RM142.5 million. Profit before tax and zakat for the Islamic Banking Group meanwhile rose 31.9% to RM567.1 million.

Asset quality at Maybank Islamic remains outstanding at 1.03% improving further from 1.90% in December 2010, while the financing to deposit ratio also improved significantly to 83.75% from 97.9% a year earlier. Islamic financing to total domestic loans has grown to 28.5% from 26.1% a year earlier, a result of the Group’s Islamic first strategy.

Loans growth outpaced industry growth in the republic to reach total size of S$24.6 billion. This was fairly diversified between consumer loans (40%) and corporate loans (60%). Asset quality remains relatively stable with net impaired loans ratio of 0.26% compared to 0.25% in December 2010.

Bank Intenasional Indonesia (BII) registered a 108.8% rise in profit before taxation and zakat for the six months to December 2011, to Rp 451 billion from Rp 216 billion previously on the back of higher income as well as significantly lower provisions.

BII has continued to build on its network which stood at 351 branches in December 2011 compared with 327 a year earlier. The number of self service terminals throughout the country has also risen significantly over the past year from 952 in December 2010 to 1152 in December 2011.

Revenue in Maybank’s Greater China operations (covering Shanghai and Hong Kong) registered a 68.4% jump to RM109.5 million for the six months period compared to last year. Loans expanded 43% to reach a total of RM7.60 billion as at December 2011 from RM5.32 billion in June 2011. Profit before tax for the region rose 18.3% to RM65.14 million previously.

Maybank Philippines, Inc. (MPI) posted a record profit before tax of P386 million for the six-month period ended 31 December 2011, more than triple the P119.1 million in the previous corresponding period. Net of applicable income tax, gains/losses from market valuation of derivatives and other adjustments, profit amounted to P273.9 million, up 87% from the P146.2 million previously.
Total income expanded at a robust pace of 39% to hit a new record of P1.2 billion. Net interest income expanded at a hefty 46% to P933.3 million and made up three-fourths of total income. Non-interest income grew 20% to P307.5 million. Loans rose 57% from a year ago to breach the P23-billion mark, with almost all segments growing at a double-digit pace.

MCB Bank of Pakistan (a 20% associate of Maybank) ended the year to December 2011 with an 18.9% rise in profit before tax to Pakistan Rupee (PKR) 30.32 billion on the back of a 22.7% rise in revenue to PKR 51.82 billion. Net interest income surged 21% while non-interest income rose 28% owing mainly to increase in dividend income, investment income and income from dealing in foreign currencies. The Bank also continued to see improvement in interest margin which rose to 25.18% from 23.64% previously, while return on equity was relatively stable at 25.35% from 25.51% previously. Loans declined by 9.5% but deposits grew by 13.8%.

ABBank of Vietnam (20% associate of Maybank) saw revenue for the year ended 31 December 2011 increase by 36% to VND 1.83 trillion, contributed by a 51% rise in net interest income. Profit before tax, however, declined to VND 400.5 billion from 661.4 billion a year earlier due largely to higher operating expenses and an increase in loan loss provisioning. Net interest margin increased to 16.14% from 12.55% a year earlier, while NPL ratio rose to 2.79% from 1.16% previously.

Loans increased by 0.2% to VND19.92 trillion owing mainly to growth from the corporate sector. Partly due to compliance to measures set by the central bank, the Bank has reduced its exposure to non-productive sectors, focusing instead on the corporate and retail loan sectors.