The 24-year-old former national will be joined by Zurie Harun, who finished tied for the lead with one-over 145 as well as Khor Kheng Hwai, Shaifubari Muda and Chong Chee Meng. These local champions will play against some of the best players in the world for a prize purse of USD 2.5 million from 12th to 15th April 2012 at the Kuala Lumpur Golf and Country Club.

Trailing the overnight leaders by five strokes after an opening round of 77 yesterday, Haziq carded eight birdies against four bogeys to earn his maiden professional start at the prestigious National Open. 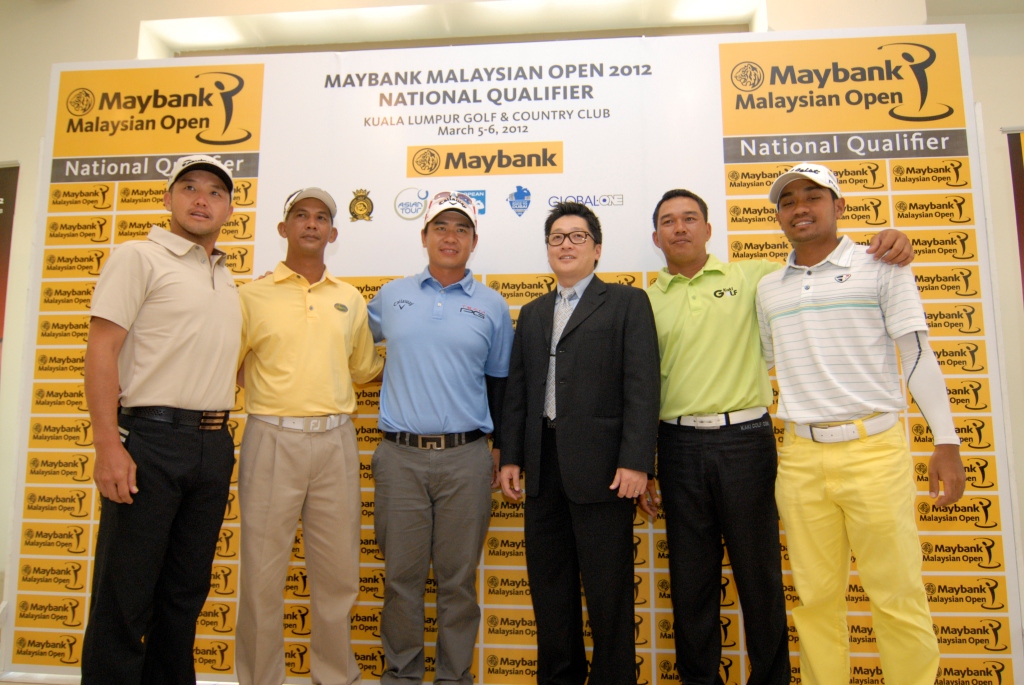 "I am definitely delighted with the results and I am proud to once again earn a start at the Maybank Malaysian Open. It is a dream of any Malaysian golfer to play at their National Open and I'm going to cherish the experience," said Haziq, who participated in the 2008 edition as an amateur.

"I did not have a great round yesterday as I struggled with my putting all day and I encountered the same problem early in the round today. I just told myself that there was nothing to lose and that eased the pressure on me. I pretty much got into a rhythm after the par-three fourth hole and I was able to play my own game, including three straight birdies from the fifth hole, which put me in contention for a slot at the Open."

Zurie on the other hand was ecstatic on earning his second appearance at the Open, having started at the 2006 edition. "It is a great result for me personally and it is an honour to play at the Maybank Malaysian Open. I knew that I had a good chance today after my performance yesterday and I was able to hit the greens consistently as well as nail my share of crucial putts to beat the mark," shared Zurie, who added a 72 to his first round 73.

The five qualifiers will be joined by the top-ranked Malaysian in the field, Danny Chia, who qualifies automatically by virtue of being placed in the top-65 of the Asian Tour's Order of Merit as well as Maybank invitees Shaaban Hussin and Nicholas Fung.

President of the Malaysian Golf Association (MGA) Admiral (R) Tan Sri Dato' Setia Mohd Anwar Mohd was optimistic that the domestic stars will make full use of the opportunity to play in the tournament. "It is a tremendous honour for any local golfer to be part of the Maybank Malaysian Open and I would like congratulate the top five players today who will join their invited compatriots at the tournament. The Maybank Malaysian Open is the perfect stage for our golfers to hone their skills and temperament against some of the world's best and I'm confident that they will step up their game at the tournament," he said.

Meanwhile, Mohamed Adam Wee, Chief Marketing Officer of Maybank said, "We once again witnessed a competitive and nail-biting qualifier, which goes to show how much our Malaysian professionals cherish the opportunity to play at the Maybank Malaysian Open. We would like to applaud everyone for their camaraderie in victory and defeat as well as the passion and enthusiasm displayed by all the 51 participants over the last two days. We hope that the victors today will go on to make the nation proud during the actual tournament in April."

Sharing Maybank’s views was John Eu of GlobalOne. "We are excited to see that we can now lay claim to having a formidable and high-quality local field as witnessed during the Maybank Malaysian Open National Qualifier.

Kudos goes to Corporate Malaysia especially Maybank for their support towards establishing a strong domestic professional circuit in the country, which has done wonders in increasing the competitiveness and gamesmanship of our players. Buoyed by the patriotic support of the local galleries, we can be sure that the 22 Malaysians in the field will play with their hearts on their sleeves and challenge for leader board positions, if not the crown."

A star-studded field is expected at this year’s Maybank Malaysian Open, with the Malaysian professionals competing with some of the most exciting golfing talents from the world over to lift the Seagram Trophy. To date, world number four Martin Kaymer and defending Masters champion Charl Schwartzel have confirmed their participation in the event and with a prize purse of USD 2.5 million up on offer, spectators can expect an exciting tournament this April 12-15.