Charl Schwartzel in Top Position On Day 1 of MMO

South Africa's Charl Schwartzel stormed to a near-flawless round of 64 to take the opening round lead at the Maybank Malaysian Open.

Shrugging of any effects of jet lag after a 30-hour round the globe flight to Kuala Lumpur on Tuesday, the 2011 Masters champion definitely got the 51st edition of the National Open well underway, draining nine birdies against a sole bogey at Kuala Lumpur Golf & Country Club to take a one-shot lead over two-time Asian Tour Order of Merit winner Jeev Milka Singh.

"I played very well today. It has been some time coming now because I have been working really hard for the last couple of months and I haven't had anything for me. It has been feeling good for a long time but given me nothing but I seemed to put it all together and eight under was a good score for me," said Schwartzel. 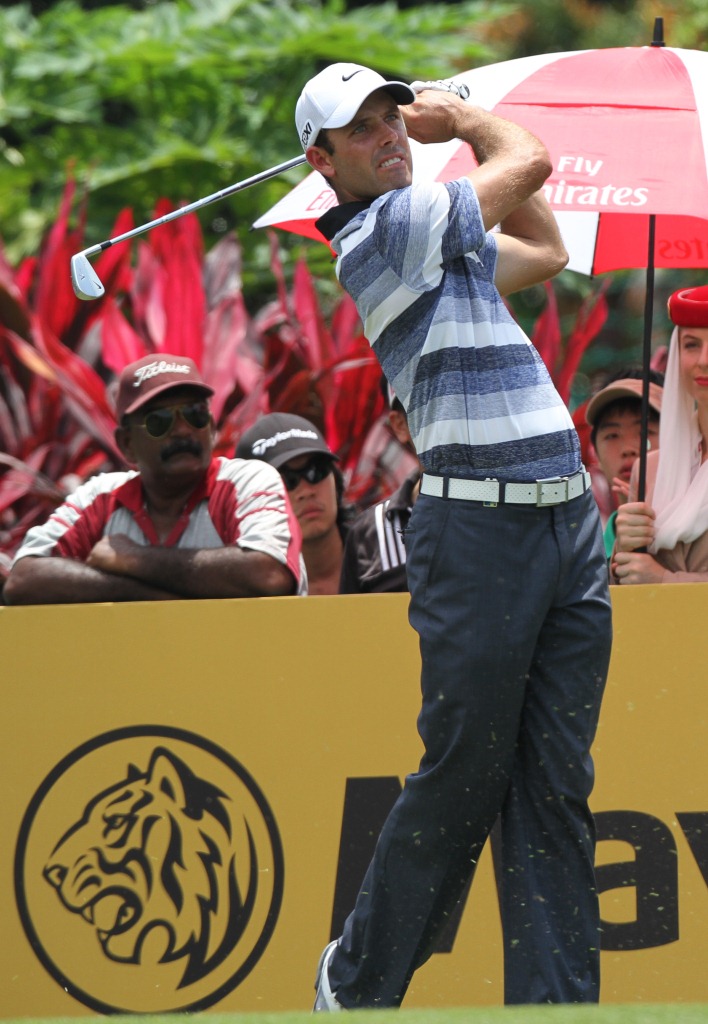 The 28-year-old was pleasantly surprised with his level of freshness and was grateful for the luck of draw which enabled him to tee-off in the relatively more bearable morning weather. "I felt surprisingly good today. I got a good night's sleep and woke up this morning before the alarm. The tiredness seems to catch me more in the afternoon than the morning, so it felt pretty good."

"It could have been one or two lower as I missed a couple of chances towards the end there but I'm happy with 64 - I haven't shot a number like that for a while," he added.

Starting on the back nine, Schwartzel made three birdies and a bogey to make the turn on 33 before he struck his approach to the first to within three feet. That sparked a run of five gains in seven holes for a brilliant inward 31 as Schwartzel looks for his first victory since becoming a Major champion a year ago.

Milkha, who started from the tenth began his day with an eagle before bogeying the next but had six unanswered birdies after that including a 15-footer at the 18th. "I'm really happy. It is still an early start but a positive one, so I look forward to the next three days," shared the three-time European Tour winner.

"Confidence is high. I've been playing well for a while. It all comes down to putting and I holed a lot of putts. The beauty is that I'm feeling fit. That's the most important thing because I can practice enough. I feel healthy and I think that things are getting to better better as the year goes by.

The 41-year-old Indian, who is no stranger to local golf fans having cut his teeth on the domestic TDC Tour in the late 80s had some good words for the West Course layout and Malaysia in general.

"This course is excellent. I think it is a fantastic test of golf. You hit a lot of irons off the tees and it gives you a balanced chance of playing aggressive or conservatively. I have great memories here, having started my professional career in Malaysia. My victory here previously always stays with me and coming back to Malaysia is always a great feeling. I have positive vibes coming back here. I love the country and the people," he said.

Schwartzel’s compatriot and playing partner Louis Oosthuizen was joined by American Jason Knutzon and Jyoti Randhawa of India in third on six-under with the trio of Filipino veteran Antonio Lascuna, Stephen Gallacher of Scotland and Omega Dubai Desert Classic winner Rafael Cabrera-Bello a shot back on 67.

Displaying a deep reserve of resilience, Oosthuizen posted a round of six birdies and an eagle with his only blemish of the day coming on the first.

"This morning, I felt quite good. I knew the swing was still good. It was just adapting to the weather and the green speed. But I putted beautifully today and hope to keep it going for the week," said the 2010 Open Championship winner.

Oosthuizen admitted that the pairing with his long-time mate Schwartzel allowed the former Eisenhower Trophy pair to ride on each other's good vibe. "It was long haul getting here. I think me and Charl knew the first round, concentration level won't be great. But we did well."

Other notable finishers includes defending champion Matteo Manassero, who battled back from a poor start to card a round of 70, matched by the top-ranked player in the field Martin Kaymer.

Leading the local charge was Shaaban Hussin, who posted a confident two-under 70 while Danny Chia and Ben Leong were the next best on one-over 73. National amateur Low Khai Jei was the best-placed amateur posting a one over 73.

On a day when the rest of the Malaysians in the field struggled to find their footing, Shaaban was a figure of calm as he notched a solid start to his campaign. "I played the best I could. My target was to shoot one or two under and I achieved that. It is only the first day and I wanted to get the feel of the tournament. I might have gone lower but my putting wasn't as good as I expected it to be. I hope I can do better in the next three rounds," he said.

"I was a bit shaky on the first few holes. I tried to maintain my rhythm. When I dropped a shot, I would try to make it up with a birdie. I felt more comfortable on the back nine," added Shaaban, who narrowly missed a hole-in-one chance on the 11th after his ball bounced out of the hole. He missed the ensuing birdie putt to settle for par.

The 31-year-old noted that he has to deal with the pressure of being the top-placed Malaysian in the field. "I don't want to push or give myself too much pressure. If I can play under-par every round, I believe I can finish with a leaderboard position."