Maybank Islamic Berhad signed an agreement to provide a RM100 Million Commodity Murabahah Term Financing-i (CMTF-i) facility to Universiti Teknologi Malaysia (UTM), Skudai. The facility will be used to redeem UTM’s existing term loans for the construction of hostel facilities at its Skudai campus for students. 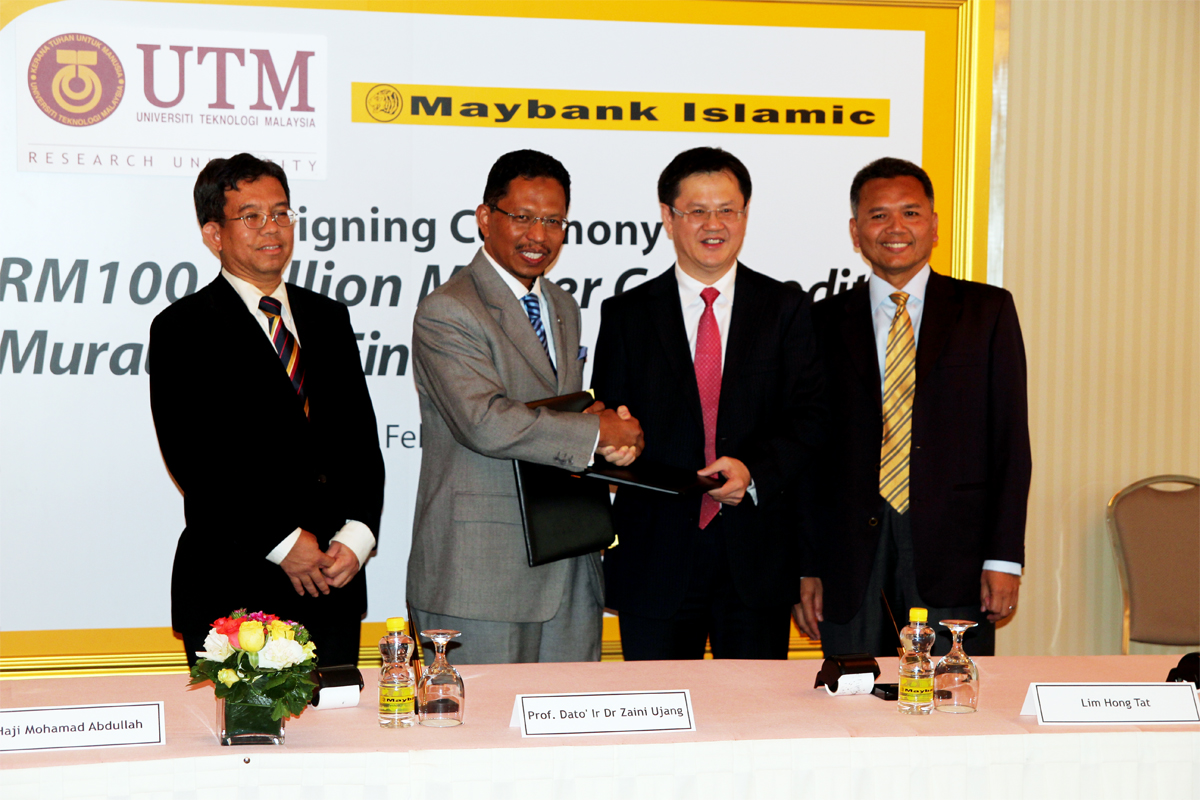 “This latest facility, coupled with other financing facilities approved since July 2010 for several government-linked institutions and corporations (GLCs) amounting to RM2.0 billion will boost our Islamic financing portfolio for this financial year. This will reinforce Maybank Islamic’s market leadership as the largest Islamic bank in Malaysia as well as in keeping with our aspiration to be the largest Islamic bank in ASEAN by 2015, further enhancing Malaysia’s importance as an Islamic banking financing hub in the world,” said Ibrahim Hassan.

“The main proposition of this financing package is its competitive pricing which translates to considerable savings to UTM. The package underscores Maybank Group’s commitment to humanising our financial services by meeting customer’s needs in offering customised solutions, fair pricing and value to them,” said Lim Hong Tat.

“Another benefit is the stamp duty exemption introduced by the Government when refinancing a conventional facility with an Islamic bank to promote Islamic Banking locally. The takaful component on the other hand is offered by Etiqa, our insurance subsidiary. This attests to our strength and capabilities in offering holistic financial solutions to our customers,” added Lim.

Ibrahim Hassan also said that in December 2010, Maybank Islamic had approved its first major foreign currency financing deal amounting to more than RM500 million for a foreign subsidiary of a government-linked institution. ““Since July 2010, Maybank Islamic has participated in two syndicated/club deals as participating financiers and shariah advisor with participation amount of RM1.1 billion for government-related projects. These facilities demonstrate Maybank Islamic’s ability to finance big-ticket deals and offer a range of Islamic financing options with competitive pricing to GLCs or other institutions involved in major government projects and initiatives,” he said.

Ibrahim Hassan added that Maybank Islamic is also on track to achieve significant financing growth for corporate segment in this financial year with good prospects seen in the education sector. ‘This will increase our capacity to be involved in major deals and also in our ability to continuously support the needs of GLCs and government-linked institutions including those in the education sector’.

Lim also said that Maybank supports the education sector in view of its importance in achieving the aspirations of the Economic Transformation Programme(ETP). “Education has been identified as one of the most critical drivers because of its impact on human capital development, productivity and other National Key Economic Areas. The government allocates considerable amount for education and public sector spending on education is expected to grow. Support from the private sector such as financial institutions is important to achieve the nation’s agenda. On our part, Maybank will continue to support the education sector,” he said.

Lim added that Maybank’s support for education ranges from its products to its corporate social responsibility (CSR) programme. “Our Education Star package allows parents to start an affordable plan for their children’s education from birth till the child enters the university while our CSR programmes allocate over RM2 million a year offering cash incentives under its Maybank Group’s Academic Achievement Awards and Maybank Group Scholarship Awards. At the university level, Maybank has sponsored Chairs in public universities, namely the Maybank Entrepreneurial Professorship Chair in Universiti Malaysia Kelantan and the Chairs of Accounting at Universiti Malaya and Universiti Putra Malaysia thus ensuring that local universities are able to attract the best academic staff to raise the standard of education. Our PINTAR School Programme provides various assistance to schools to improve their academic performance,” he said.