Maybank sends 240 to join in the F1 Petronas Malaysia GP

Two hundred and forty Formula One fans will be part of the exciting 2011 Formula One PETRONAS Malaysia Grand Prix at the Sepang International Circuit on April 9 – April 10 2011. Maybank awarded 20 Grand Prize winners who will have the luxury of watching the race for the first time live from the Maybankard Corporate Suite. Another 100 1st Prize winners will watch from the Grandstand. Each winner received a ticket for two to the Grand Prix. 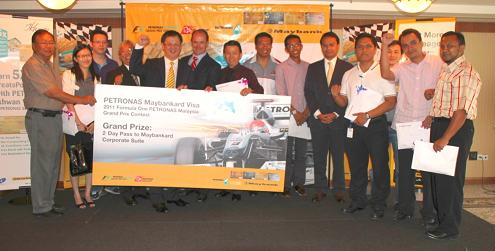 In this campaign, those who used PETRONAS Maybankard Visa and PETRONAS Ikhwan credit card and spent a minimum of RM50 automatically qualified with an entry while those who spent at any PETRONAS Service Station received a double entry for the campaign prizes. For those who accumulated a spend of minimum RM3,000, they qualified for a chance for the Grand Prize.

“The campaign had two aims, the first was to promote the convenience of cashless transactions at petrol outlets. The other was to reward our customers for their loyalty. The campaign was a success as overall billings for PETRONAS Maybankard Visa and PETRONAS Ikhwan Card grew 35% while card billings at PETRONAS stations registered a 15% increase over the same period in 2010,” said Lim Hong Tat, Deputy President and Head of Community Financial Services at a prize presentation ceremony to winners held recently at Menara Maybank.

Lim also thanked customers for supporting the campaign.”This campaign is also part of our strategic programmes with partners involved in international events to give a priceless experience to customers. We are happy to put our customers on top of the world with real life action of events which millions the world over normally watch on television,” he added.