Maybank Islamic today distributed a total amount of RM 7.07 million to 15 State Zakat centers as well as to charity bodies and organizations in Malaysia, an increase of RM2.06 million compared to the financial year of 2009.

The total amount of zakat is derived from the profits earned by Maybank Islamic Berhad for the financial year of 2010. Of the total amount, RM5.25 million was distributed to State Zakat Collection Centers, while the balance of RM 1.82 million was distributed to organisations such as the orphanages, institutions of higher learning which offers Shariah courses, religious schools, non-governmental organizations (NGO’s), Islamic welfare institutions, and various other organisations which support Islamic causes. 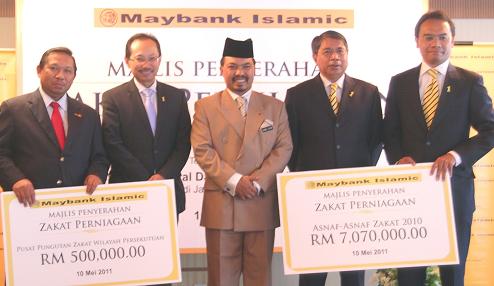 The Zakat assesment of Maybank Islamic has been certified by its Shariah committee, in accordance to the Urfiyyah method or Growth Model method. This method takes into consideration the company’s ownership equity throughout the year of assessment after accounting for some adjustments of certain items.

In his speech, Dato’ Sri Abdul Wahid said that Maybank Islamic is thankful for having the opportunity to continue with zakat payments made possible from the profit generated by its operations.

For financial year ended 2010, Maybank Islamic Berhad recorded profit before tax and zakat amounting RM533 million, an increase of 12% or RM58 million compared to year 2009. The positive financial growth is set to be consistent with increase of 29% in financing and 46% in deposit for financial year 2011.

As at end 2010, Maybank Islamic Berhad has financing market share of 23% and deposit of 20% and remained strong as the largest commercial Islamic bank in Malaysia and No. 1 in Asia with a total assets of RM48.3 billion.