Maybank Islamic Berhad (Maybank Islamic) was honoured at the Kuala Lumpur Islamic Finance Forum (KLIFF) Awards 2010 as the Most Outstanding Islamic Retail Banking. This is the third consecutive year Maybank Islamic received an award at the KLIFF. 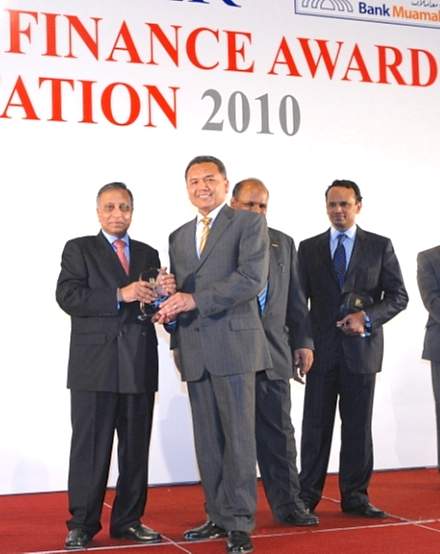 Ibrahim Hassan, CEO of Maybank Islamic received the award from YB Tan Sri Nor Mohamed Yakcop, Minister in the Prime Minister’s Department at an award presentation in conjunction with the recent 7th KLIFF held in Kuala Lumpur.

“We are delighted to be acknowledged again for our commitment and contribution towards the development of Islamic finance. Maybank Islamic has a focused strategy to stay ahead and deliver innovative range of Islamic products and services to meet the needs of its retail customers. We dedicate these awards to our customers for their unwavering support to Maybank Islamic as well as our people who are committed to ensure our continued leadership in Islamic finance in Malaysia and the region,” said Ibrahim Hassan, CEO of Maybank Islamic.

The KLIFF awards honour, recognise and acknowledge the significant efforts and contributions by individuals and institutions in developing the Islamic finance industry.

Maybank Islamic also recently clinched The Asset Triple A Islamic Finance Awards 2010 for the Islamic Retail Bank of the year.