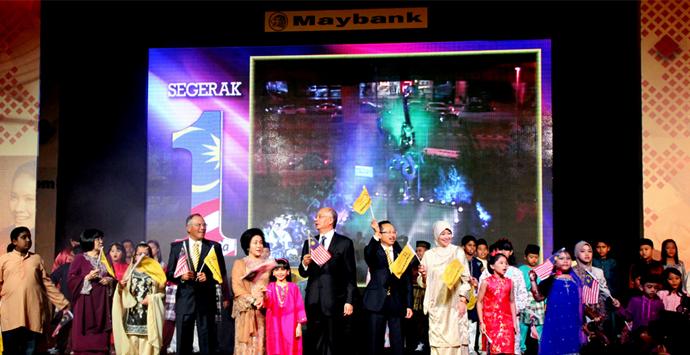 Created by renowned local artist Yusof Ghani, the 6.68-metre-tall masterpiece is a celebration of the 1Malaysia spirit of unity and cooperation among the people of the nation, and also represents Maybank’s 50 years of growing with the country and people.

The Prime Minister launched the Segerak 1Malaysia sculpture via a live feed from Mandarin Oriental to its location at Menara Maybank where over 500 Maybank employees gathered to witness the unveiling.

The Prime Minister also officiated the launch of the new Maybank Foundation with Maybank making an initial pledge of RM50 million. Through the Maybank Foundation, the Group will now undertake corporate social responsibility (CSR) initiatives across its network of branches regionally by focusing on the key pillars of education, welfare, environment and conservation, and sports.

In his welcome speech the Maybank Chairman said, “Our anniversary year’s theme "Close To You" is apt during a time that our Prime Minister is calling for the nation to embody being 1Malaysia in all we do, so we can move forward together and achieve a high income economy by 2020 as one people. This very much resonates with all of us at Maybank, and to immortalise the 1Malaysia spirit we now have the Segerak 1Malaysia sculpture which is Maybank’s gift to all Malaysians.”

In addition to the sculpture, being a good corporate citizen has been a top priority for Maybank during the year. “In recognition of our widening regional role, we have formed the Maybank Foundation in this Golden Anniversary year to further enhance our CSR contributions. The initial contribution by the Bank of RM50 million represents RM1 million for every year of our existence and symbolises our commitment to share the journey ahead by making a difference in how we impact lives,” said Tan Sri Dato’ Megat Zaharuddin.

Maybank in its 50th year initiated various customer rewards programmes and championed numerous worthy causes, most notably the plight of the Malayan Tiger by providing a RM1 million grant to the Malaysian Conservation Alliance for Tigers or MYCAT. It also held its very first Global CSR campaign in November this year that resulted in over 10,000 Maybank employees across the globe coming together on 20 November 2010 to undertake various activities in community outreach.

Tan Sri Megat Zaharuddin went on to add that at the core of Maybank's success has been the Group’s ubiquitous presence in communities, both urban and rural. Maybank aims to continue playing its part, and through regional ambitions to position the Malaysian icon prominently amidst the growing economies and communities of the region from the heart of ASEAN.

He said, “Maybank has grown from being a pioneering leader, trail-blazing with one innovation after another over the years, to become a Malaysian financial powerhouse that has stood the test of time. Our customers have made us who we are and our 50th celebrations have aptly reflected this journey of growth. We are grateful to our customers, employees, the community and all stakeholders who have brought Maybank to where it is today – a valuable Malaysian brand well on its way to becoming a leading financial services group in the region.”

From its beginnings as the coffee shop bank in Malaysia, today Maybank’s global network caters to more than 18 million customers, with over 9.5 million in Malaysia alone. It is the largest bank by asset value in Malaysia, with an extensive reach of 1,750 branches and offices in 14 countries and 40,000 employees worldwide. In the last financial year ended 30 June 2010, Maybank reported a record Group profit after tax and minority interest (PATAMI) of RM3.8 billion. The Group also had a good start in the current financial year with first quarter PATAMI ended 30 September 2010 of RM1.03 billion, 16% higher than the previous period.