In July 2017, the Financial Conduct Authority (FCA) of the United Kingdom announced that it would no longer compel banks to make contributory submissions to maintain the London Interbank Offered Rate (LIBOR) by end-2021, making it clear that reliance on LIBOR could no longer be assured beyond this date.

LIBOR is a benchmark used by over USD 350 Trillion of contracts globally; it is regulated and administered in the UK and has been adopted by banks and financial institutions (FIs) globally. Regulators globally have emphasised that it is now time for market participants to start transitioning away from the use of LIBOR to alternative benchmark rates, primarily Risk Free Rates (RFR).

LIBOR is a benchmark interest rate, based on the rates at which major global banks borrow funds from one another in the unsecured interbank lending market. It is currently calculated for five major currencies: US Dollar (USD), Euro (EUR), Pound Sterling (GBP), Japanese Yen (JPY), and Swiss Franc (CHF). It has 7 tenors – Overnight, 1 week, 1, 2, 3, 6, and 12 months; with the 3 and 6 months tenors being the most commonly used.

2. Why does LIBOR need to be replaced?

Liquidity has significantly reduced within unsecured interbank funding markets, driven by the introduction of short-term wholesale funding rules, money market reforms, and Basel III liquidity rules. Other than that, LIBOR panel banks are increasingly reluctant to submit quotes based on ‘expert judgement’ rather than liquid underlying transactions. The manipulation of LIBOR rate submissions by some panel banks has raised serious concerns about the reliability of LIBOR as a rate. Regulators in the US and the UK have levied approximately USD 9 billion in fines to banks involved in the scandal, and investigations are still on-going.

3. What will replace LIBOR?

Risk-free rates or "RFRs" are likely to replace LIBOR.  RFRs are more representative and reliable than LIBOR as they are based on liquid markets and actual transactions. RFR working groups across a range of countries have identified alternative RFRs for the relevant currency (e.g. SOFR to replace USD LIBOR, SONIA to replace GBP LIBOR). 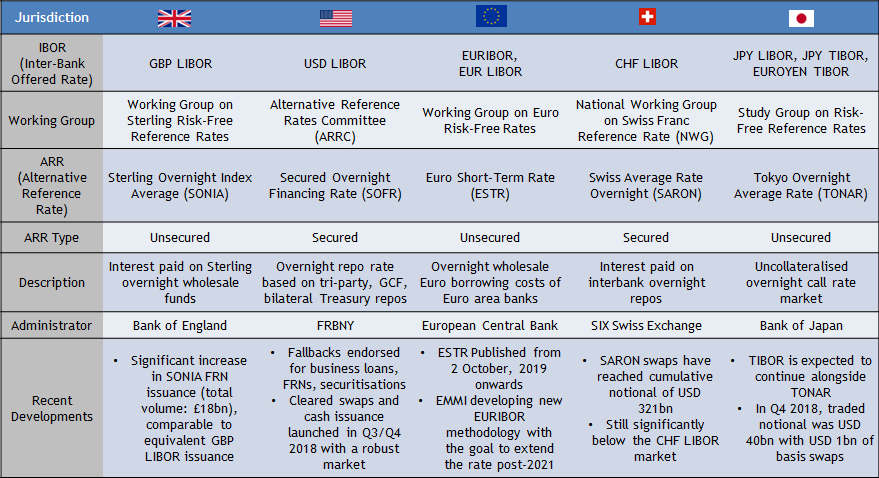 5. What does this mean for Maybank and our customers?

We will periodically update this page with new information on LIBOR transition.